Teaming up with Phyllis to reach beyond the choir 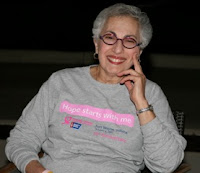 to write a short piece about herself, so you could see why she and I are working together. Here is what she wrote:

"After growing up in Fort Dodge, Iowa, I graduated with a degree in English from the University of Iowa. I spent the first seven years of my career teaching middle school English/language arts in Rockford, Illinois and in District 59 in the Chicago suburbs. In 1973 we moved to Fort Wayne, Indiana. After a year of subbing and working on my Masters degree, I spent the next 24 years as an English teacher/department chair at South Side High School, an inner city school with a strong sense of community, despite the fact that many of our students were economically deprived.

After many years of very happy retirement, I began to be concerned about the negative consequences of No Child Left Behind. Watching the devastating effects of both the Race to the Top and the current political hostility towards public schools and teachers, I became alarmed. While I was too busy going to school, teaching, and raising a family to have been an activist during the 60s, now that I am in my 60s, I have the time and the passion to speak out for those who are too intimidated and too fearful to speak for themselves. That's my story, and I'm sticking to it!"

When we met during the events this summer in Washington DC, Phyllis and I began to talk about how to use the voting power and expertise of retired teachers and grandparents(and anyone else who wants to join us!) to change the direction the federal government and states are taking education. She told me about her experiences explaining to people (who have only heard sound bites) what is really going on. These are often people who would not go to a public screening, but might well come to a small group of friends meeting in someone’s home. The idea of using either the Mis-Education Nation video http://vimeo.com/29748608 or August to June for such small group meetings, led to thinking of the people who would lead such groups as ambassadors of sorts: making the link between people with progressive ideas who are aware of what is happening in public education (but whose jobs are not threatened by their speaking out), and people of good will who might be energized by hearing more about what the situation looks like “on the ground.”

When Phyllis got back to Indiana, she and 10-15 people met with Anthony Cody and brought up the idea. She also wrote to Rita Solnet of Parents Across America. In the meantime I talked to several CA retired teachers. Ray Bacchetti, of Palo Alto, Mark Phillips of Woodacre, and Bonnie Theile and Terry Sayre of Tulare all asked to be kept in the loop. In October we posted a discussion site on my Facebook page, but Facebook did one of its unpredictable changes and my site no longer has a discussion page...a good reason to put this idea onto my faithful Blogster Blog!

It is our feeling that there needs to be a clear action we suggest when such meetings are held. We are also looking for a good title that people can refer to. I have been using 'senior ambassadors," but that may sound more like the name of a travel group! So our first step is to grow a bit bigger by creating an online community that can come up with a unified direction, outreach ideas, and a name.

In a separate but related move, the Indiana folks are considering using Diane Ravitch’s visit this coming March as a reason for showing several films at a local theater: Race to Nowhere, American Teacher, The Inconvenient Truth About Waiting For Superman, Lessons From The Real World, and August to June were suggested. There is also a possibility of working with Jan Resseger, Minister for Public Education with the United Church of Christ (who wrote a powerful article: http://www.ucc.org/justice/public-education/pdfs/Message-12-web-version.pdf) and arranging screenings through UCC. If Diane is coming to your area, that might be an impetus to suggest to whatever group is bringing her that they also screen AUGUST TO JUNE!
Posted by Amy Valens at 11:06 PM